Black students have been at Kent for well over 70 years. Over the years the history and contributions of Black people have been obscured. My family moved to Kent, Ohio in

1969. Up until that time we had never lived anywhere for more than 4 years, sometime we moved after only 2 years. Imagine my surprise we entered year 5 of our residency in Kent, the last place I ever thought we’d live in permanently. However, my dad saw and opportunity and grasped it with both hands. 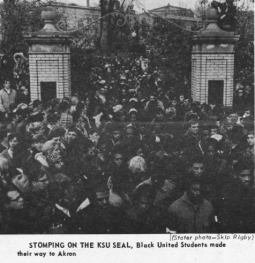 From his first day on the campus, as he was being interviewed for a position as director of a new Black Studies program he realized that the students were running the show. Those students were led by the Black United Students. At the time there were 600 Black students enrolled at Kent State, which had a total of 20,000 students enrolled.

The 60’s were a turbulent time. A sitting U.S. President was killed in 1963, not by a foreign terrorist, but by a homegrown terrorist. In rapid succession, his assassination was followed by the assassination of Malcolm X, Martin Luther King, Jr. and presidential candidate and former U.S. Attorney General Robert Kennedy, just to name a few. Burning buildings lit up the night sky from L.A. to Harlem, from Cleveland to Miami in 1965, following the death of Malcolm X. The assassination of Martin Luther King, Jr. was like a last straw leading to more firebombings, looting and shooting in major cities across the country. With the increased numbers of Black students on college campuses there was good reason to wonder how those events would affect students residing in America’s ivory towers.

The era of Jim Crow began with the end of Reconstruction, in the former Confederate States of America. However, the colorlines created in the 1890’s had no geographical restrictions. They were applied to sports, love, public accommodations, employment, dining and all other aspects of American life, wherever and whenever it might be possible Blacks and Whites might mix, accidentally or intentionally. National fraternities and sororities were no exception and in fact remain quite segregated, to this day.

These organizations were formed on White campuses to create a support network in a hostile environment and out of need to be members of social organizations, like other college students. The fact that White frats and sororities felt it necessary to put discriminatory language in their national constitutions contributed to the situation and made it a necessity to begin creating a parallel universe, just in order to survive. Kent was no exception. With the Kappas going national in 1956 and the Alphas in 1957 Kent had its first Black social organizations.

During the 60’s Black students became much more noticeable on college campuses. Organizations like the Congress of Racial Equality (CORE) and the National Association for the Advancement of Colored People (NAACP) were able to get a foothold on campuses, like Kent, and began to call into question the status quo. One of their first targets were the fraternities and sororities. The national constitutions of these organizations were called into question because of explicit language stating members had to be White male Christians, i.e. “No Jews, No Dogs, No Blacks allowed.”

Throughout the late 50’s and early 60’s this was O.K. Following the assassination of Malcolm X, Medgar Evers and Bobby Hutton and the subsequent rioting that followed, enough was enough. Black students on college campuses began creating much different organizations with well defined agendas and a list of demands. This set the stage for the creation of Black Studies departments, Black cultural centers and a decided increase in Black faculty, staff and students.

At Kent State this battle was spearheaded by William S. Tolliver and Dwayne White AKA Fargo or Ibrahim Al Khafiz. In January of 1968 Henry Austin was invited to speak on campus by the United Christian Fellowship (UCF) and the NAACP. He spoke as a representative of the Deacons for Defense and Justice, a decidedly militant organization fighting against the Klan and for voting rights in a number of southern states. Ten weeks later Martin Luther King, Jr. was assassinated, making the founding of a more militant organization that much more urgent. Five days after the death of King, Tolliver and White put an ad in the Stater for the first public meeting of the Black United Students, listing them as co-chairmen.

Seven months later 1300 students and reporters walked off campus to a self-appointed exile in Akron. Three hundred Black students, literally half the Black student population of Kent, were amongst the KSU refugees. This was a publication relations fiasco the likes of which the university had never experienced. A silent protest leading to a full scale student strike, with national news coverage, was just what university officials did not want. The Black United Students first met in the Spring, but it was what happened in the Fall that gave them enough leverage to have their demands met.

My name is Mr. Khemet coming at you live, with no jive. I come from the east with knowledge and wisdom of an ancient kind. If you hear my words, it's time to change your mind about a lot of things. I make what I need and I need what I make, hopefully you'll enjoy some of the things you see here at my site. View more posts