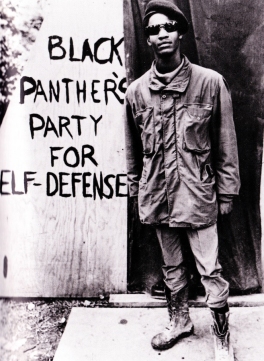 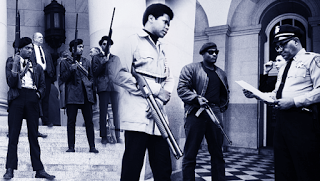 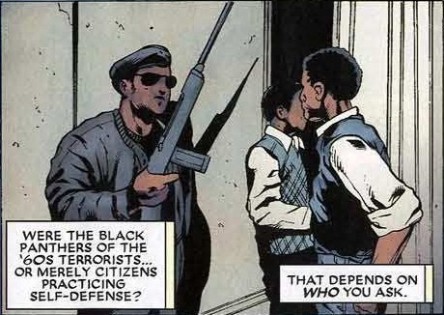 From the 1960’s to the present when you heard about a Black Panther you thought of a Black man ready to put his life on the line for the good of his family and community. On February 15th, 2018 all of that history was placed aside as Black Panther took on a new meaning. On that day, at midnight, “the first minute of a new day,” as Gil Scott-Heron liked to call it, Black Panther was redefined by the Walt Disney Company as a noble African king. A king who defends the world from a wild-eyed African American pretender to the throne of the Black Panther.

Without going into a lot of details surrounding the origins of this poser, he’s depicted as a wild-eyed megalomaniac, bent on the destruction of White Supremacy and the world as we know it, through force of arms and superior weaponry. With the help of one lone CIA agent, an army of African gorilla-men, not to be confused with revolutionaries engaged in guerilla warfare and the Black Panther’s mother, this pretender, who is also of royal blood, is defeated and ultimately chooses to die a very unnatural death. This is the plot of Disney’s latest blockbuster movie.

Ultimately, the Black Panthers for Self-Defense, originally out of Oakland, CA are depicted as the bad guys, out for blood and world domination; while T’Challa, the fictional Black Panther made famous by Stan Lee and Jack Kirby, is depicted as one who only uses violence when absolutely necessary. For many, who only know the Panthers as gun-toting thugs,  it may be hard to see the irony of all this. For the real Black Panthers to be depicted as blood-thirsty savages requires one to take a ride on the Disney “Jungle Cruise” version of Black History, where the Panthers are the enemies of the agents of Black oppression.

The Black Panther Party for Self-Defense was organized in Oakland, CA, by Chairman Huey P. Newton and Bobby Seale in October of 1966. They established a 10 point platform and published it in nearly every edition of their weekly newspaper, “The Black Panther: Black Community News Service.”

Hmmm, I don’t see anything in their platform indicating a need to wipe out White people, seeing as how they accepted help from Black and White people, in implementing their “free food” and “free breakfast” programs, which eventually went national. Apparently, the “free breakfast” program was such a good idea the federal government decided to implement their own and continues to do so in public schools, parks and recreation centers all over the country to this day. They established free clinics and advocated for prisoners using the legal system as their weapon of choice. Now there’s an “Innocence” program affiliated with a number of colleges and a cadre of lawyers that assist innocent victims of the criminal justice system on a pro bono basis. I’m still looking for the revolutionary megalomaniac part of their program. Last, but not least, they used open carry laws to arm themselves when acting as witnesses, in potentially lethal encounters with police and the residents of Black communities from coast to coast, preceding the “Black Lives Matter Movement” of today.

I say all of this to “make it plain” why I take issue with the Disney version of Black History. It’s not about the glamor, glitz or the costumes, even though the costuming posed an issue all by itself. The movie makes Wakandaland a representation of the entire country of Africa, which, by the way, is not a country. Just as, the mixing of bits and pieces of unintelligible linguistic modalities is an issue, resulting in a mumbo jumbo language that’s both stereotypical and demeaning. I can overlook all of this, including the crass Disneyland ad placement at the end of the movie. What I can’t forgive is Disney’s unabashed attempt to rewrite Black History, as long as it makes a buck. I can’t go for THAT! Unh, unh!!