Ever wonder how people cleaned their teeth before plastic toothbrushes were invented? The answer is all around us. We used sticks!? Yes, good old sticks were used and in many parts of the world are still used to maintain good oral hygiene. In this case the simplest solution is the best solution.

A variety of sticks, common to the area they thrive in have been used for millions of years to clean the teeth and avoid all types of diseases, as well as tooth decay. Amongst the Muslims a good tooth “brush” is promoted as one of the practices of a good Muslim during Ramadan. Recommended by the Prophet Muhammed, in the Quran, billions of Muslims, around the world use Miswaak, during Ramadan, to clean their teeth with. “The Miswaak/Seewak (Toothstick) The miswak (miswaak, siwak, sewak, Arabic: سواك or مسواك) is a teeth cleaning twig made from the Salvadora persica tree (known as arak in Arabic) [AKA the toothbrush tree]. Islam taught us 14 centuries ago methods, regarding dental health, that modern medicine has only recently started to introduce.” This toothbrush tree has been promoted by the World Health Organization for oral hygiene use.

“Chewsticks are the ancient healing roots of the Egyptians, used for over 6,000 years to alleviate the effects of coughs, colds, sore throats, indigestion, addiction to any kind of drugs, cigarette smoking, alcoholism and overeating. They’re sweet and can’t be beat for brushing your teeth!”   Dr. Akh N. Aten

I first learned of chewsticks in a book by the herbalist Soaring Bear. After suffering from dental malpractice for years, I happened up on his book “Dental Self-Help.” This is a scary topic for most of us, whose mouths have been colonized by members of the American Dental Association (ADA). Much of what Soaring Bear wrote was news to me. I had never thought abut how people cleaned their teeth before the invention of plastic brushes. I also knew nothing about proper dental care, other than the propaganda regularly distributed by the ADA. I took what he said with a grain of salt. Then I started trying what he talked about and learned the truth, from my own personal experiences. I have yet to prove him wrong.

In this wonderful little book he mentions numerous natural brushes, used by people all over the world, on every continent, by every race of people. There are over 300 types of plants used to clean teeth, not to mention those used to maintain other aspects of oral hygiene, including Red Willow, Acacia, Hibiscus, Umbellularia, Sumac, Alfalfa, Sassafras, Gouania Lupuloides (Jamaican Chewstick), Peelu/Neem, Cottonwood, Smoohfruit, O’ahu, Hairyfruit, lemon tree, lime tree, tea tree, fig tree, cinnamon, bamboo, dogwood, mango, apple, pear, bamboo and hundreds of other chewsticks.

My personal favorite is Glycyrrhiza glabra, AKA licorice. Licorice has a good taste and is soft and pliable once it’s been chewed for a few minutes. It has multiple uses, including an ability to reduce the urge to smoke, drink or do drugs. By definition, unadulterated chew sticks are all natural.

Using a chew stick is easy as 1, 2, 3. I usually break mine in half and begin chewing on 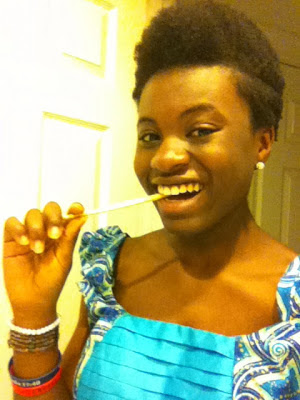 the broken end, since it’s more malleable than the unbroken end. Once it softens up a little, it will be as soft as chewed paper and is now ready to be used as a toothbrush. Any areas that are deformed from cavities will be difficult to brush as the brush will snag on the jagged areas.

The first time I ever saw anyone using a chewstick was in Brooklyn at an Africa Dance Festival in the early 80’s. A street vendor was selling them and I thought they might help me survive New York. Indeed, they did. The rest of the time I was in the city I chewed my stick all day and was able to go without food, until I returned to my Uncle’s flat in Harlem, every evening. From then on, I was hooked, but I could not always find them, not until I left Ohio and moved to L.A. I found a local wholesale herb dealer that sold them and developed a regular trade in the sticks, along with my Brother King Ammon Ra. Between the two of us we introduced them to the cultural community through festivals, reggae shows and other events we sold at all over the L.A. valley. Before we knew it our local incense dealer picked up on it and started selling them to his army of dealers all over the city. Now, we see them being chewed by movie stars like Wesley Snipes and Jamie Fox in Western movies, etc.

I’ve introduced their use to thousands of children, all over Akron, who now ask for them every time they see me. It never made sense to me to use candy as a reward, when we have natural things we can give children, like licorice sticks. No matter where you live, there are herbs particular to your area that are panaceas, like licorice, golden seal, hibiscus, frankincense & myrrh. The hundreds of varieties of chewsticks, used all over the world are some of these panaceas.